"They always say time changes things, but you actually have to change them yourself."
~ Andy Warhol
1928 - 1987
American artist who was a leading figure in the visual art movement known as pop art.

Four tips for for embracing change positively include:
1. Consider perspective by asking and learning:
From where does it come?
For what reason?
What lead to it?
Where is it going?
In what way can I?
2. RACE for successful change by using the following words when asking and answering questions, as these words will lessen defensiveness and encourage conversation:
R - Respecting
A - Appreciating
C - Considering
E - Expecting
3. Ask rather than Assume, and implement a new rule
Ask people how they like to engage
Ask people the best format for communication
Ask people how they like to be treated, and then, instead of "The Golden Rule" of treating people the way you want to be treated, implement the rule of treating people the way THEY want to be treated.
4. Resist saying, feeling &/or believing “change is hard”, and in place of letting people continue to believe/say “this is tough”, remind them that they are tough!

In order to take charge of change, use "We" and "Let's, and consider the possibilities of positive outcomes as the result of the charge change...and this way, you won't leave it to chance!
Posted by Debbie Lundberg, Author, Speaker, Trainer, Coach at 4:07 PM No comments:

Since difficult conversations are a part of life, and some people are defensive, or suspicious, ensure you don't contribute to the defensiveness or uncertainty by using the following language and skipping the other: 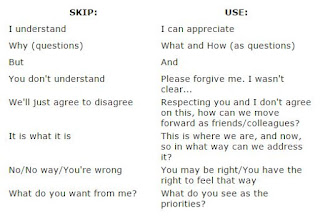 By focusing on the useful words, you just may skip some of the disagreements and difficulty!
Posted by Debbie Lundberg, Author, Speaker, Trainer, Coach at 4:33 PM No comments:

Debbie Lundberg, Author, Speaker, Trainer, Coach
Tampa, FL, United States
“Reversing the Slobification of America”TM is the theme here, so it is likely no surprise that my personal brand is “Committed to applied knowledge, growth, fun & ROI”. Similarly, my business brand (www.DebbieLundberg.com) is “Partnering with individuals & organizations to enhance communication, behaviors & relationships”. My areas of expertise include: Inspirational & Educational Speaking Engagements, Corporate & Team Trainings, Personality & Interest Assessments, and One-on-One Life, Business & Presentation Consulting. As a result of these specialties, I have earned the reputation as an "Edutainer", one who educates and entertains at the same time! I am honored to work with multi-million dollar corporations to multi-idea people as we focus on progress...not perfection! So, here we are...enjoy the blog and if you want to get even more, or you have an idea for the blog, please email me at Debbie@DebbieLundberg.com, or check out http://www.youtube.com/user/DebbieLundberg! Thank you!